The following article was written by Chuck Abare.

Recently I had
the pleasure of having a long phone conversation with Ron Seekamp, from
Fridley, MN. As a lot of folks know, Ron is the man that played around with
adjustable crescents which got him notoriety and was written up in the
Purple Martin Update for his efforts. Ron didn’t have the internet at the
time, but he’d read about my efforts to increase the usage of crescents
in purple martin colonies. We talked in length about martins in general,
housing and of course the starlings, and what the crescents meant to them. I
asked in detail about his method of adjusting his crescents and he ended up
sending me one for my personal inspection. Being from the engineering field,
this thing wasn’t that hard to figure out and just maybe there might be some
room for just a little improvement as far as an easier method to use, plus I’m
a gourd man and, since the one he sent me was made for houses, I definitely
wanted to figure out how to adapt them to gourds. I wanted to figure something
out that any average Joe or Mary Landlord could do to make these things and
then use them at their colony sites.

As of late there’s been a lot of concerns
about people changing over to regular sized 1-3/16″ crescents and of course,
their anxieties of watching their birds try and try and continually fail to
enter these forms of entrance holes. I’ve had this on my mind a lot and wonder
if there really are some birds that just can’t figure them out
. I don’t see it at my site. My birds don’t even know they’re there and act
just as if they were round holes. Along with that, there’s all the folks that
are wondering if a new colony can be started with crescents alone. Both
questions have been answered many times, but still, folks balk at using them
or others refute the need for them at all. Because everyone’s situations are
different and no one scenario will work the same for everyone, some of those
questions get pretty tough to answer.

However, throughout the purple martin world,
we are quickly beginning to find out that the use of some form of SREH is
now a requirement in a martin colony simply because the European starling
has become a major factor in keeping martins. These pests are now the most
populous bird species in the U.S., are just about everywhere, and sooner
or later, they will visit your sites. I don’t know about everyone else’s
situations, but I have to work for a living and I’m just not able to spend the
entire day watching my (bird) site. I am infested with starlings so crescents
are a requirement. My job requires that I leave the house each day and plus, I
do have other things that need doing and I just can’t be at my site 24 hours a
day to protect it.

Still, I’m asked these questions time and
again because of my web page – Are crescents really necessary? Can a
new colony be started with them? What about the new excluder? Are these
SREH’s as good as they say they are? How do I make them?  etc, etc,

So, to these folks, I submit these thoughts
and I do so in a couple of different scenarios. There are probably a lot more,
but I just don’t have the time to write about all of them. Some thought will
have to be given to the individual scenario of the landlord reading this. In
all scenarios presented here, I’m going to assume that starlings are
a factor, because if they aren’t now, sooner or later, they will be. Also,
these scenarios include natural gourds as one of the housing selections.

Your housing, (new or old) has regular
round entrance holes. The martins come and decide to set up shop, but the
constant barrage from starlings ends up driving them away or worse yet, you
lower the house and find dead martins inside the compartments because of the
starlings treacherous ways.

Your housing (new or old) has crescent
openings on each compartment that is the normal 1 3/16″ size to begin with?
Martins come and figure them out and all is fine and good. You have your
martins and they are safe from the starlings.

Martins come and find regular sized
crescents (1 3/16″) however after trying for a good length of time, they just
can’t seem to figure them out. You, the landlord, get anxious and because you
don’t want to lose your martins, either replace the crescents with round or go
and whittle the crescent larger so that they can get in. Yes, you’ve now
allowed your martins to get in, however, you’ve done two things. First, you’ve
ruined the crescents and now they are no longer starling resistant. Second,
the starlings, who are just as hungry for nesting cavities as the martins, are
also able to negotiate these whittled out crescents and thus, there is no
difference than if you had round holes. Your martins are no longer safe and
the starlings can again do their thing and your martins could very likely end
up dead.

I am assuming every one is getting my point
here so let’s look at one more scenario that can be applied to either new
housing or old housing.

I’m leaving this one alone for a couple
of reasons. First, the inventor, a man by the name of Duke Snyder, is
apparently trying to patent the design so I don’t want to get into this kind
of mess and secondly, I’ve found that the design is very difficult for the
average person to make and so far my attempts at making them accurately have
proven difficult. In order for these to work, I believe these need to be
stamped with tooling dies to be accurate and apparently Duke is interested in
some return for his time. I’m not trying to make this hobby difficult, I’m
trying to make it easy and I’m trying to do some good for the martins by
allowing the average landlord to be able to make and use the tools of this
hobby. Also, my attempts to add these Excluders to gourds has proven to be
extremely difficult because of the curved surfaces. However, crescents are no
problem at all. Secondly, excluders seem to have a lot of problems with
‘thick’ wooden houses. The birds just can’t seem to negotiate the thick walled
houses with Excluders.

OK, here’s what this whole thing is
leading up to. What if you could have the BEST OF BOTH WORLDS? What if you
could have your large entrance holes to allow martins to get in, while at the
same time, gradually changing to regular crescents and, during the process of
changing to crescents, ‘training’ your martins to use them.

No, I haven’t lost it. Now just stop to
think for a minute. With the increased sized crescents, say 1-1/2″, martins
will treat them exactly as if they were regular round 2″ holes. They’ll be
popping in and out just as if nothing was amiss and you the landlord will be
happy that your martins are able to easily negotiate these large entrance
holes. As the season goes on, the martins decide on a cavity and begin nest
building. Many trips are needed to build the nest. (Also, here is where good
record keeping is a necessity).

After the martins have started nesting, you
the landlord, go out and lower the house and while it’s down, you CLOSE
THE ADJUSTABLE CRESCENT by 1/16″. Raise it back up and let the martins get
used to it. Two or three days later you repeat this same procedure. Another
1/16″ is gone. Still the martins quickly adapt and continue with their nest
building. Again, two or three days later, the same thing, another 1/16″.
Again, the martins adapt. Get the picture. Before long, your crescents are all
the way down to 1 3/16″, your martins are trained to use them and the
starlings are foiled by not being able to enter.

Now, what do you think? Did we train the
martins? Are they not able to use the crescents just as if they were there
all along?

So, let’s stop to think some more. If we
started with 1 1/2″ high crescents, lowering them 1/16″ every other day or so
would be 5 changes to achieve the 1 3/16″ crescent that is 99% starling
resistant. That’s only 10 – 15 days that we take our martins from starling
loving large holes down to starling hating resistant holes. And, the beauty of
it all, the martins have learned to use them and don’t even know about it.

I know this sounds like a nutty thing, but
I’m serious. In fact, I’m willing to bet that we don’t even need to go all the
way up to 1 1/2″ to begin with. We may only need to go to 1 3/8″. Since my
entire site is nothing but the regular crescents, I need to find someone that
wants to change so that I can do some in-depth studying to see just where it
can be started. I know of a couple of landlords that still have round holes
and are wanting to make the change, so we’ll see what happens. 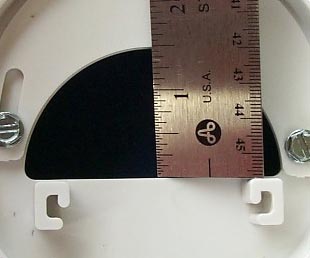 This one shows the crescent adjusted to the
top of its range, giving a full 1-1/2″ opening for the martins to get thru.
The small hole on the right is the pivot point and the slot on the left allows
for adjustment…………………. 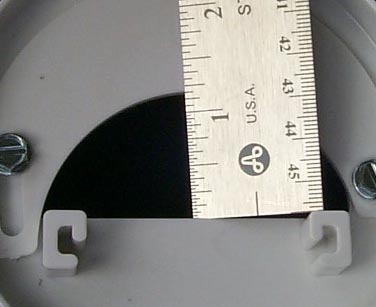 And this one shows it adjusted all the way
down to 1-3/16″. This height should stop 99% of all starlings from
using these homes.

I’m a firm believer that if done properly and
given enough time, any martin can learn to negotiate the fully closed
crescent, especially if he/she was ‘trained’ to do so from the beginning. If
you have a starling problem or are just starting out and are afraid of
standard crescents, then just maybe this is an option for you. And, before you
know it, your martins will not only be negotiating these things just like
mine, they will be safely nestled in the back of their gourds or house
compartments where starlings just can’t reach.. Give them some thought.
They’re easy to adapt to wooden houses, and easier to use.